On Sunday, I had a milestone birthday. Yes, I turned 40. To me, age is just a number and so I try to have fun with it. In fact, as a runner, it's kind of fun to move into a new age group.

If you have followed my blog or have connected with me on Facebook or Twitter, you know that I love Outback Steakhouse. They are great to interact with in the social media world and they have been more than kind to me. My earlier "Talk to the Brand" entry gives you the back story of my relationship with them.

Well, imagine my surprise when on Friday out of the blue I get this tweet from Outback. Immediately, I'm trying to figure out what's going on. Sure, I had joked with them on Twitter about throwing my birthday party at their nearest restaurant, but never once did I expect anything. Some of my Twitter followers who also follow Outback saw the tweet too and were just as curious as me.

Tweets started flying fast and furious as we all tried to figure out what was going to happen. Outback sent another message saying that the package was out for delivery. I quickly told our secretary that I needed to run home and leave a note to allow the package to be left since I wasn't sure if it was coming to my home or work address.

While I made the quick trip home, more and more people began to follow the thread on Twitter as everyone was trying to figure out what was going to happen. I got back to my office just in time to read this tweet.

I realized that my package was on campus and I needed to find our delivery person to claim it. I went to our shipping and receiving area while my Twitter followers waited patiently (ahem).

I found the box, but the delivery guy was nowhere to be found. So, I left him a note and headed back to my office to open it. I called my wife, Carla, who also works at MVNU, and asked her if she wanted to come watch and then waited for her to arrive. In the meantime, one of my other Twitter followers saw me enter the building with the box and posted this picture. It was fun letting the anticipation build. :)

My wife arrived and I asked her if she would use my iPhone to record me opening the box. I had no idea what was going to be inside, but I figured that I owed it to the people following on Twitter to capture the moment for them to see. Here it is:

At this point, my heart was really racing. I had no idea what to expect on the video. I'm feeling like Tom Cruise in "Mission Impossible" as I insert the flash drive into my laptop. There's one file on the drive labeled "Dave Parsons 40th Birthday", so I click on it. Here's what popped up:

The light bulb in my brain clicks on and I know right away what's going to most likely be in the rest of the box. Once the video ends, I ask my wife to record me opening the rest of the contents. Here it is:

There was a very generous $45 voucher for me to use with "Happy Birthday, Dave" written on it as well as a cool Outback backpack to help me transport the Outback Surprises - 40 individually wrapped presents of which I had no idea of the contents.

Twitter followers started tweeting for me to find them and give them a surprise, but I tried to think about what I wanted to do to make the most impact. It was a no-brainer for me to give my wife the first present and so I did and started filming each and every Outback Surprise so everyone on social media could see it. I also found out quickly that people were counting the gifts as they were given to see how many I still had to give. :) Here's the other videos so far:

My daughters, Ashley and Kylie

Scott Sharpes, pastor of Lakeholm Church of the Nazarene

Dr. Ryan Halley, a friend & fellow runner who lives in Oregon and will do the Hood to Coast Relay with me in August 2012

Let me just say that this has been so much fun!!! I really appreciate Outback continuing to allow me to connect both with them and to help me show my friends and colleagues what an awesome brand that they are.

I still have two Outback Surprises to give out and I have some ideas about how I'm going to do it, so stay tuned to see what happens next.

On a side note, my family and I decided to go to the Outback on Bethel Road in Columbus on my birthday. This is the same restaurant that I wrote about in my original blog about them, and ironically we ended up with the same waitress. The plan was to use the voucher that they had sent me for my birthday and to try to keep a low profile. Well, that plan failed miserably when Chris Pyles, the owner, came over and talked to us. He ended up giving me my meal and one of the new Oreo chocolate waffle desserts for free since it was my birthday. He is way too nice and definitely another extension of the great Outback brand. 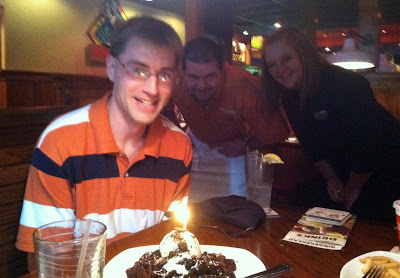 I share all of this not to brag, but to say that you just never know what a brand might do to show how much it appreciates the support of its followers. And, I am by no means the only person to get Outback Surprises although I do kind of feel like their version of Subway's Jared and I will happily play that role for as long as they will allow me to. :)

Update: I just heard from Outback and they appreciate the blog and my followers. They are going to send me a $45 voucher to give away to one person. To qualify, post a comment and let me know who you would give an Outback Surprise to and why. For an extra entry, tweet this post out with @Outback and @MVNUSID included and let me know that too. Good luck!
Posted by MVNUSID at 12:05 PM

I would give an #outbacksurprise to one of the veterans who shop at the Base Commissary. A good gift would go a long way, and is the least we can do for them! @Outback @MVNUSID

This is great, Dave! Happy 40th! I wish other brands would jump on this phenomenal marketing idea! Look forward to crossing paths at some point again!

While not as patriotic as James's idea, I would give the #OutbackSurprise to my wildly supportive wife who is standing beside me as I re-enter the SID life at an institution two-and-a-half hours away.

Hey Dave- it's @MorBagshaw! So first off, you were totally the right person for @Outback to give this gift to and I hope you had an awesome birthday! As an owner of a social engagement firm it's so inspiring to see @Outback do something this inspiring and creative and frankly I'm inspired for my own business! Amazing job @Outback & Happy Birthday Dave!

I would give the outback surprise to our nanny. She loves our son so much and puts our mind at ease every day so we can continue in our careers!

I would give this Surprise to my lovely wife Krishana White. Not for selfish reasons (wink, wink), but simply because she's a wonderful woman who had dedicated her life to teaching special needs students and sharing the Gospel with the youth of our community.

well, I think you have hit up a lot of great people in your community. You've gone above and beyond with creativity. I think I'd find someone on the street that looks down in the dumps and give them the card. If possible, I'd take some time to enjoy a steak with them and hear their story. It's better than giving a dollar, plus you get to hear their story.

This is awesome, Dave! Thanks for sharing it with all of us. I would definitely give this surprise to my Dad - it sounds like a lot of fun!! :)

As a marketer, I'd love learning how Outback is organized to enable their rapid, gifting responsiveness in this way. It seems like it would take a concerted, management-backed effort to smartly and creatively engage customers as they have.

MVNUSID
Relationships are the most important thing in my life. This blog is about connections I've made and adventures I've had. We really are all connected in some way or other. Thanks for joining me on the journey.